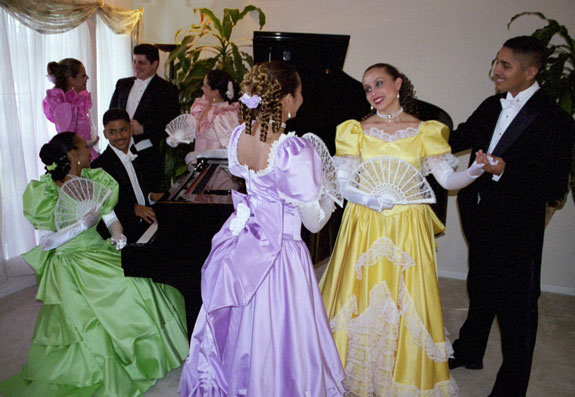 Danza is a musical form created in Puerto Rico and is one of our "Bailes de Salon" (Ballroom Dances). It flourished in the second part of the 19th century in the salons of elite, agricultural landowners (hacendados) with cultural ties to Spain, and was later adopted by all, merchants and peasants alike. In the early 1800s, popular classical dances such as the Contradanza from Spain, as well as the Minuet, Cachucha, Waltz, Britano, and Rigodon, were replaced around 1840 by new music arriving from Cuba called the Habanera. The Habanera quickly became popular on the Island, especially by the youth, because of its freer and less rigid dance form. In the early days original Cuban Habaneras were enjoyed, but later Puerto Rican composers including Manuel G. Tavarez, the "Father of Danza," began inventing their own works, giving birth to a new a classical form with a hint of Afro-Carribean syncopation. Tavarez most famous student, Juan Morel Campos, composed more than 300 Danza masterpieces before he died at the young age of (almost) 39.

The national anthem of Puerto Rico, "La Borinquena," is a danza. When Puerto Ricans think of Danza, they remember an elegant dance from days gone by, ladies with fans and ballroom gowns, men in white tie-and-tails. In those golden days, the orchestra would begin by leading dancers in a "paseo," an elegant walk around the ballroom, giving gentlemen the opportunity to show off their lady's grace and beauty. This romantic introduction ended with a salute by the gentlemen and a curtsey from the ladies in reply. Then, the orchestra would strike up and the couples would dance freely around the ballroom to the rhythm of the music. In those days, every lady and gentleman learned the language of the fan -- the secret code that helped them attract the attention of the lady or gentleman of their dreams!