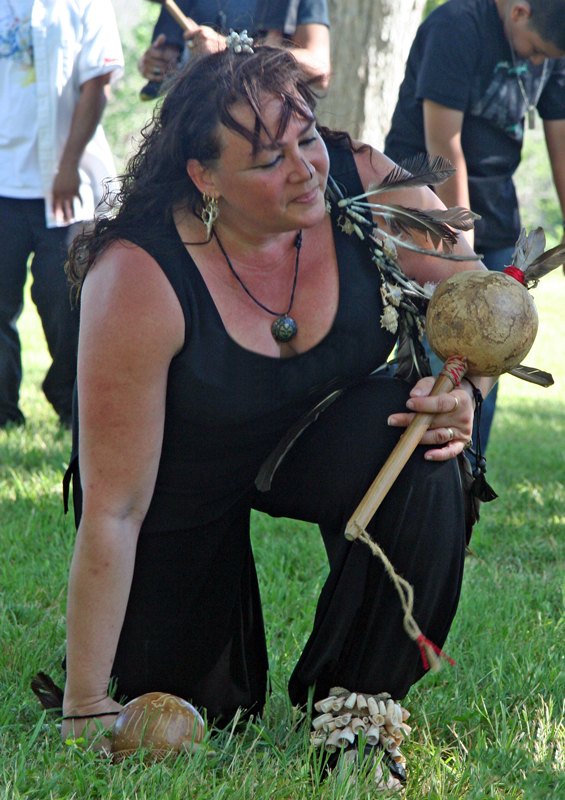 With indigenous roots in the mountains of Puerto Rico, Dr. Ana Marÿa Tekina-eir· Maynard is a proud blood descendant of the Tainos of Boriken. Her family line dates back 6000 years to the Arcaicos (Ancient Ones), the Island's earliest inhabitants. Tekina-eir· honors her lineage by serving her community. She has dedicated her life to preserving and transmitting Puerto Rico's cultural traditions to the new generation. She is a historical and cultural researcher, playwright, choreographer, songwriter, multi-disciplinary performer and teacher of Puerto Rico's traditional music and dance. Beyond her cultural mission, Dr. Maynard is a Master Certified Spiritual Life Coach and a credentialed Associate Certified Coach (ACC) by the International Coach Federation. As an innovator (11 technology patents) holding a doctorate in Electrical and Computer Engineering from Carnegie Mellon. Her combined expertise is unique in the Southwest.

Dr. Maynard is the Founding Executive and Artistic Director of the Puerto Rican Cultural Center, which she founded in 1997 as a nonprofit 501(c)(3). It is the only cultural center in Texas and the Southwest affiliated with the Institute of Puerto Rican Culture for the offering of authentic, high-quality cultural programming. As the visionary since the cultural center's inception, her Executive duties span every responsibility required by a nonprofit Senior Executive. She is the Artistic Director of the center's cultural arts programs and its performing company of dancers and musicians, Puerto Rican Folkloric Dance. Since 2001, achievement and quality has been validated by repeat support by the National Endowment for the Arts, including an NEA Chairman's Award (2007), the Texas Commission on the Arts, the City of Austin through the Cultural Arts Division, and Humanities Texas, the state affiliate of the National Endowment for the Humanities (since 2011), and Bloomberg Philanthropies (since 2018). 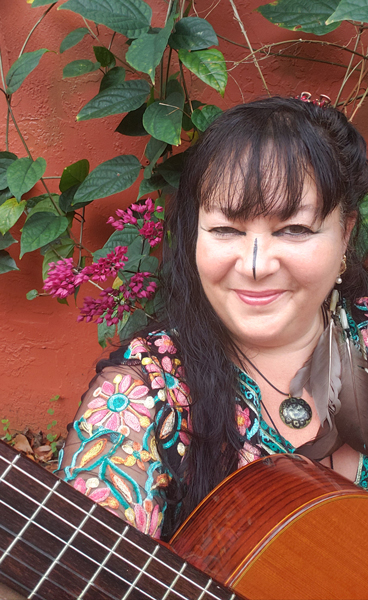 Born into a musical family, Tekina-eir· was raised in a Puerto Rican neighborhood in the suburbs of La Isla (The Bronx). Surrounded by elders nostalgic for home, Puerto Rican music and dance were always a vibrant and active part of Tekina-eir·'s life. From weddings to impromptu gatherings, she looked forward to family and friends bringing guitars, congas, guiros, and maracas, and dancing to the rhythms of Puerto Rico all night long. As a young child, Tekina-eir· enjoyed playing percussion on "latas de galletas" (tins of Export Soda crackers) to the sounds of latin albums she would buy with her own allowance. As an adult, Tekina-eir· was inspired to bring her rich culture to life in Austin Texas so her baby son could know the joy of her childhood.

Today, Dr. Maynard is an expert resource on the Mainland for Puerto Rico's cultural history and heritage. Since 1998 she has been trained by Island Masters in oral history and ancestral traditions based in native Taino, Spanish, and West African roots. (See Training below.) Tekina-eir· is a choreographer, dancer, and teacher of traditional dance, music, games, culture and history to preschool through professional adults. As a multi-disciplinary performer, she plays a variety of instruments including folkloric percussion, guitar, and indigenous flutes. She learned folkloric percussion on barriles, panderos, and maraca with Bomba Patriarch Modesto Cepeda. At age 11 she taught herself to play guitar, and in 2013, decided to be true to herself and relearned to play -- as a lefty. She has written over two dozen original compositions including Taino Areytos for ceremony on earth clay and bone flutes to Mayohuacan drums, Afro-Boricua music (Bomba and Plena), and Jibaro (mountain) aguinaldos on guitar fused with Taino language.

Dr. Maynard was named the Austin YWCA Woman of the Year for Arts (2005), and was recognized for her contributions to the Taino community with Areito Award for Dance and Theatre (2009). 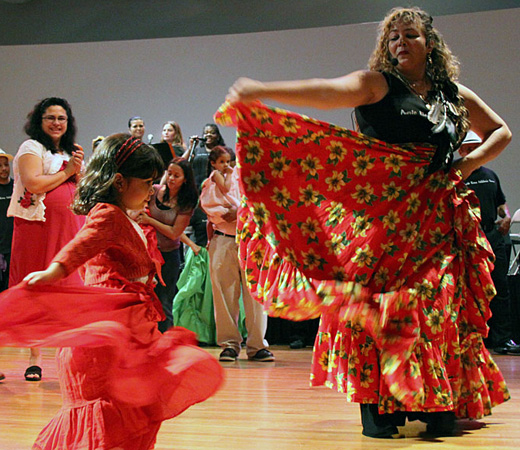 In addition to her ongoing training by Puerto Rican folklore masters, she continues advancing on her guitar with flamenco guitarist Isai Chacon (Director of A'lante Flamenco). Tekina-eir· has also studied a variety of classical forms. She began taking piano lessons at age 5, and in graduate-school studied classical piano with Russian concert pianist Natasha Snitkovsky. In New York and Austin she studied classical dance forms including ballet and jazz; but her favorite memories were character dance performance roles with Austin Dance Ensemble (Arletta Howard-Logan). Her move to Texas in 1992 opened a new world of Mexican folkloric dance, where she trained with Roy Lozano, Chuy Chacon, Raymundo Guzman, and Jaime Guerrero (Monterrey, MX). Her past credits include mainstage performances on the Paramount and Zilker Hillside theatres with the Roy Lozano's Ballet Folkl¾rico de Texas professional company (1993-1997). She co-choreographed and performed in the Cenzontle music video "La Bruja," dedicated to the folklore of Veracruz, Mexico (1998). 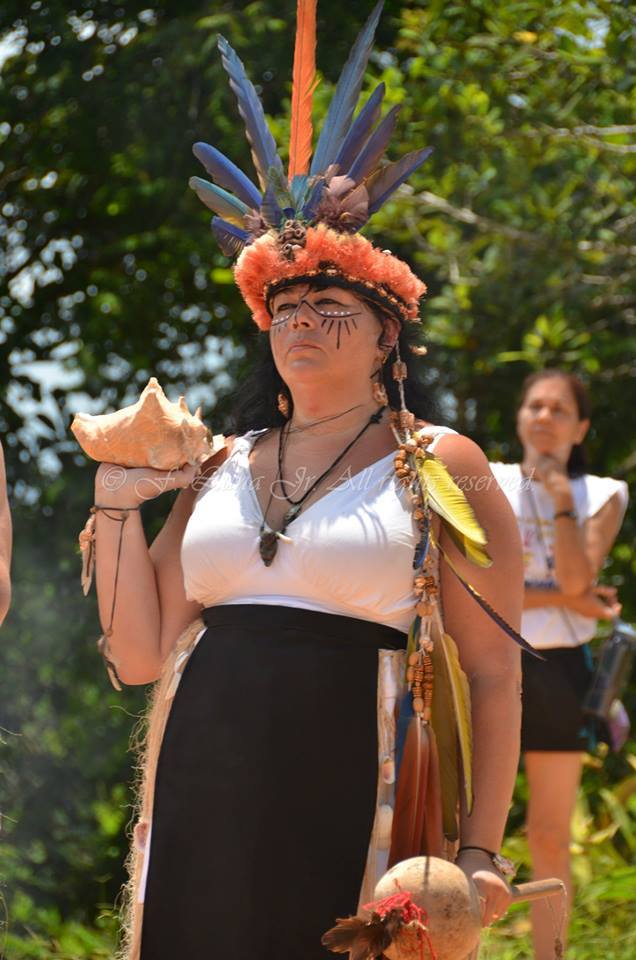 Beyond her cultural mission, Dr. Maynard is a Master Certified Spiritual Life Coach, and a credentialed ACC (Associate Certified Coach) by the International Coach Federation (ICF). As a Dreamworks Coach, she helps those in need of Personal Transformation discover the important messages they receive through dreams. Tekina-eiru is passionate about helping Healthcare and Helping Professionals facing compassion fatigue and burnout. Dr. Maynard complements her ICF training with professional development in holistic, integrated health and healing, stress management, and ecotherapy.

Tekina-eiru is a Texas Master Naturalist and enjoys sharing Nature's timeless wisdom through her published book and interactive workshops based in Taino spirituality -- When Nature Sings: A Taino Journey. Her keynote talks and workshops combine nature-centric inspirational anecdotes, original photography, live Taino flute music, and original songs on guitar that remind us that Nature enjoys communicating with humanity through experiences that bring meaning to life. Participants engage in music-making and role playing that reveal insights, encourage meaningful discussion, and provide "tools" to take home that can be used in everyday life. Her workshops serve all ages and interests, and teach "Healers" -- from caregivers to licensed professionals -- a powerful way to renew themselves through a connection to Nature. These works were developed with support of the National Endowment for the Arts, Texas Commission on the Arts, Mid-America Arts Alliance, City of Austin Cultural Arts Division, and Humanities Texas with umbrella support from La Pena.

Tekina-eir· is a consecrated Naguety (Elder) and a Tekina -- a Teacher of Taino traditions and writer of ceremonial music and dance. She leads -- Yara Taino & Guaytiao -- an active, spiritually minded indigenous community who celebrate heritage and share life-ways on how we live in relationship with Nature. In 2008, Tekina-eir· 's Amerindian Mitochondrial DNA identifying her as Taino from Boriken/Puerto Rico (Haplogroup A-1) was "confirmed" by Juan Carlos Martinez Cruzado, Professor of Genetics at the University of Puerto Rico-Mayaguez, and further identified that her family's Boriken origins dated back 6000 years to the ancient peoples that predated the Tainos -- the Arcaicos (The Ancient Ones). The mtDNA results were of no great surprise to her Mom, who wondered what was the question. Since 2007, Tekina-eir· has been a member of the Concilio Taino Guatu Ma-cu A Boriken (based in Puerto Rico) where through oral teachings she has learned much about her Taino heritage.

Beyond her cultural and coaching credentials, Dr. Maynard is an innovator (11 technology patents) holding a doctorate in Electrical and Computer Engineering from Carnegie Mellon University. Her passion for Applied Research matured at IBM Austin where she worked for 20 years. Her unique multidisciplinary expertise has inspired innovative ideas that use lively Puerto Rican traditional dance to teach engineering (STEAM).

Puerto Rican music and dance has always been a very special part of Tekina-eir·'s life. She is very proud to share the joy of rich traditions with her community, and hand down cultural heritage to the next generation!