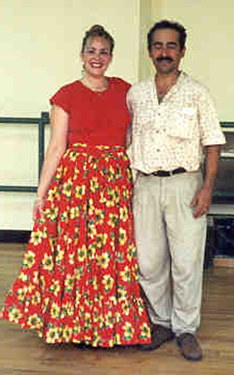 "I had the honor of spending several days with Joaquin Nieves and his 23 year old dance company, Guateque Ballet Folklorico de Puerto Rico, on one of my pilgrimages back to Puerto Rico. I went, secure in my knowledge of "Seis Chorreao," yearning to learn more of our "bailes de los montańas" (our mountain dances). What better man to learn them from than this Director from Corozal, a tiny town in the mountains of Puerto Rico! Before this trip, I could only imagine the beautiful dances one could dance to the many styles of Jibaro music. A live performance and a workshop later, I learned that my imagination was not big enough! What creativity! And the mountain dances kept on coming!"

Joaquin, my now long time friend and teacher came to Austin in 2003 to give PRFDance a master workshop and joined us for a our season-ending performance of Celebrando 2003. Joaquin and members of Guateque also joined us for our Celebrando 2007 - 10th Anniversary Maestros Reunion performance. See our website photo album.] 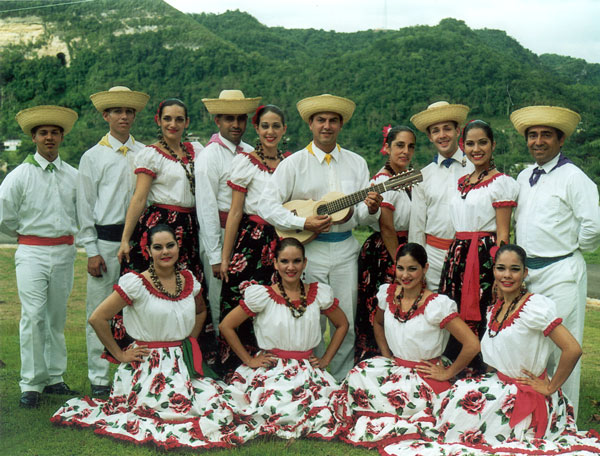 Founded in 1976 by its current director and choreographer Joaquin Nieves Caldero, Guateque is a 40-plus member performing company of dancers and musicians based in the small moutain town of Corozal. It has presented itself at different cultural centers, fairs, public squares, schools, universities and in other private celebrations around the Island under the auspices of the Institute of Puerto Rican Culture. It has also been supported by the National Endowment for the Arts and the Puerto Rican Tourism Company. Considered as one of the most authentic groups in its expression of the Puerto Rican folkloric art, Guateque has represented Puerto Rico in different international folkloric festivals in Central and South America, the United States and Europe. Guateque de PR has succeded in intergrating the serious research, the collective work and the creativity in order to hold performances full of rhythm, art, spice and color. Puerto Ricans express who they are and the way they feel through music and song. Guateque Folkloric Ballet of Puerto Rico in its touring around the Island and abroad has always left in every place a beautiful and authentic remembrance of the history of Puerto Rico.

Joaquin Nieves Caldero was born in Corozal, Puerto Rico. Since his youth his passion for the arts and dance, led to him becoming a poet as early as high school. During his years as a student at the University of Puerto Rico, Joaquin was a member of the group "Retablo Puertoriqueno". It is here where he solidified his interest in folkloric dance and visualized his hometown of Corozal becoming a model for Puerto Rican culture. Inspired by the island's culture and Puerto Rican folklore, in 1976 Joaquin founded "Guateque Ballet Folklorico de Puerto Rico". In 1984 he founded the Escuela de Bailes Guateque offering classes in jazz, folkloric music and dance to middle and high school students.

Joaquin is the artistic director, choreographer, costume designer, and visionary of Guateque. In his ballets he recreates the past, giving careful attention not only to the authenticity of the music and dance steps, but to details ranging from the accuracy of period and regional costuming. The authenticity of Guateque's presentation of Jibaro music and dance is a reflection of Nieves' own native mountains roots, as well as his careful research and interviews with mountain locals who hold the memories of village customs, traditionals dances, legends, music, and history. From his efforts has flourished an elegant, nostalgic, and dignified choreographic composition that reflects a sense of nationalism and historic legacy, combined with creativity. As choreographer for Guateque, Joaquin Nieves has created more than 15 ballets composed of 90 traditional dances representative of the traditional life in Puerto Rico since pre-colonization, on to the Spanish and African heritage up to the more contemporary dances of plena. Throughout the twenty-five years of existence, these works by Joaquin have been exhibited in the Unites States, Europe, the Caribbean and Latin America.