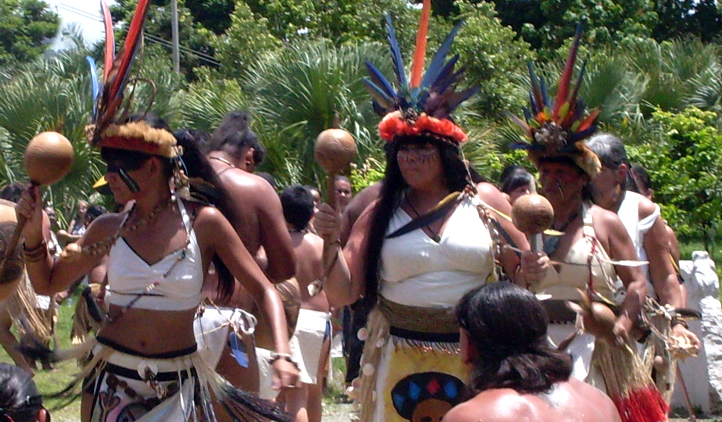 The Conquistadors explored Puerto Rico on Columbus' second voyage to the New World, November 19, 1493 and were greeted by the Taino, a peaceful indigenous people who called the island Boriken, Great Land of the Valiente and Noble Lord. There were millions of Taino living across the Caribbean at the time. Taino had a lively intelligence and a pure mind with a natural goodness that shined through. They lived in small yucayeques (villages) led by a Cacike (chief) and subsisted on hunting, fishing and gathering of native cassava root and fruits. The Taino believed in one supreme God and held a deep sense of spirituality that was present in every aspect of life. They held many ceremonial events including areytos (dances) in the batey (ceremonial plaza) that was located at the center of their yucayeque surrounded by their bohios (homes).

The Taino population rapidly declined from slave labor conditions brought on by the Conquest, and new European diseases for which they had no immunity. Horrific numbers were slaughtered and many took their own lives to escape the brutalities. By 50 years after the Conquest, history recorded the Taino extinct. In reality, Taino communities survived by escaping high into the Cordillera Central mountain range. By 1514, 40% of officially recognized wives of the Spaniards were Taina. In 1800, the thousands of full-blooded Taino who still lived in the mountain regions disappeared from record when the Indian category was dropped from the census. In 1899, a US War Dept Census reported that "Indian types" were everywhere in the mountain settlements.

Because of this history, it's not surprising to learn that 61% of all Puerto Ricans carry Amerindian mitochondrial DNA from their maternal lines -- just from their mother's side. Tainos were not extinguished, they were assimilated! Taino traditions survived, handed down from mother to child and are a permanent part of our island's heritage, our vocabulary, music, customs, culture, beliefs and the nature of our people. There's a "resurgence" on the Island and on the Mainland -- Taino descendants are "waking up" to a calling to reconnect to their heritage -- and it grows stronger every day. For that reason, it is important that we learn about our first root, our Primera Raiz. We are not a complete people without understanding the Taino legacy that is part of our fabric, and the traditions that we still enjoy today. Here are Taino Resources to learn more.